The Power Of Medicinal Mushrooms

Anyone who knows me, knows that I am a huge fan of Paul Stamets and his work on Medicinal Mushrooms.  It is almost impossible to overstate the importance of the role that fungi play on planet earth.  When you dig in to this subject, it is mind bending the role that fungi play in virtually every layer of life.  The networks of mycelium that stretch for miles and miles all over the planet carry an intelligence and a level of sophistication that is almost unimaginable.

So what does this have to do with nutrition?  One of the major benefits of a handful of species of fungi that scientists have been studying is their profound support that they provide to our immune systems.  Recently, Dr. Joseph Mercola published an article that synthesized a lot of the information on mushrooms and instead of retelling the story, I thought I would share the body of the article here. He did a really nice job capturing a lot of the information in one easy-to-read article.

I also would highly, highly recommend this video from one of the TED talks of Paul Stamets. Paul is a national treasure and one of the world’s leading mycologists. Seriously…this video will blow your mind.

Here are the salient points from Mercola’s article…

Some of the most potent immunosupportive agents come from mushrooms, and science is just beginning to tap into this vast natural medicine warehouse.

Some mushrooms destroy cancer cells, and others facilitate nerve regeneration.

They can actually harness radiation to thrive, as was found by a robot sent to map the inside of the entombed Chernobyl nuclear reactor in 1999.

The robot found a hardy fungus chowing down on 200 tons of melted radioactive fuel.

In addition to bringing us nutrition and powerful medicine, mushrooms offer great benefits for the planet.

You may be surprised to learn that mushrooms have the following green applications:

Of the 140,000 species of mushroom-forming fungi, science is familiar with only 10 percent, according to world-renown mycologist Paul Stamets in “The Most Powerful Medicine in Nature”. About 100 species are being studied for their health-promoting benefits. Of those hundred, about a half dozen really stand out for their ability to deliver a tremendous boost to your immune system.

Mushrooms are nature’s recycling system. If it weren’t for mushrooms, we wouldn’t have plants, because mushrooms (and their “parent” mycelium) break down rocks and organic matter, turning them into soil that provides the framework to nourish plants..

Mushrooms are actually only the fruiting body of a more vast fungal form—the mycelium. The mycelium is a fascinating cobweb-like mat that infuses nearly all landscapes. It is through the mycelium that the fungus absorbs nutrients from the environment. When two compatible mycelia combine, the resulting mycelium occasionally forms fruiting bodies called mushrooms. The mushrooms make spores, which fly away to make new mycelial colonies, and the lifecycle is complete.

Mycelial mats can be too small to see or cover vast areas of ground.

Their extreme tenacity makes the soil spongy and able to support 30,000 times its weight. A single cubic inch of soil can contain 8 miles of mycelium cells. The largest living organism on Earth is a mycelium in Eastern Oregon that covers 2,200 acres, is ONE cell wall thick and 2,000 years old.

Paul Stamets believes fungal mycelia and the intricate, branching network they form function as “the Earth’s Internet,” a complex communication highway that is sort of Mother Nature’s neural net. In some ways, mycelia are “sentient” and seem to demonstrate learning. If one pathway is broken, it develops an alternate path. According to Stamets, when you step on it, it knows you’re there and “leaps up” in the aftermath of your footstep, trying to grab debris. The mycelia—not JUST the mushrooms—contain many of the healing agents for which mushrooms are revered.

Hanging with Fungi Increases Your Odds of Survival

We’re more closely related to fungi than we are to any other kingdom. We share the same pathogens, meaning bacteria and viruses. As a defense against bacterial invasion, fungi have developed strong antibiotics, which also happen to be effective for us humans. Penicillin, streptomycin, and tetracycline all come from fungal extracts.

The predominant mushrooms displaying antiviral activities are the polypores, sometimes called bracket fungi or woody conks, tough and fibrous fungi characterized by many tiny holes on the underside of their caps. Polypores have been dubbed the “frontier” of new medicines and are thought to be the ancestors to most of the gilled mushrooms. Interestingly, there are no known poisonous polypores, whereas there are more than one hundred poisonous gilled mushrooms.

Paul Stamets recently discovered that a very rare polypore called Agaricon is effective against the poxviruses—including smallpox. This has the Department of Defense very interested, as smallpox is one of the most feared bioterrorism agents. Agaricon was also found to be effective against flu viruses.

History tells us that living in cooperation with fungi will increase our odds of survival. After major extinction events, it was the fungi that thrived because they didn’t need light and lived on dead organic matter. Organisms pairing with fungi flourished, and those that didn’t fared poorly.

Many of the mushrooms valued for strong medicinal properties grow on trees, as opposed to the ground dwellers you’ve likely seen.

These tree fungi concentrate the unique elements that the host tree has absorbed over its lifetime, which may be ten or twenty or even HUNDREDS of years. Many of these mushroom species are long-term residents of Old Growth Forests and play an essential role in nutrient recycling by decomposing old trees. The mushroom wraps itself around these special nutrients, capturing them in the fruiting body of the organism and turning it into a little medicinal powerhouse. Maybe it’s time for us to embrace the mushroom and harness it’s medicine the way the Asians have done for thousands of years.

These special agents include:

You might have heard the term “beta glucans.” The agents listed above are precursors to the more complex compounds, beta glucans. It is the synergism between ALL of these elements that makes mushrooms so medicinally powerful when consumed as a whole food—mycelium included.

Because mushrooms have such powerful immune-boosting effects, it isn’t surprising that some have great potential for battling cancer. Mushrooms with anti-tumor activity appear to increase the number and activity of killer T and natural killer (NK) lymphocytes, with no toxicity to healthy cells. Cancer cells are notorious for “hiding” from chemo agents. New research has shown that certain mushroom extracts help chemotherapy drugs better locate and identify cancer cells by “uncloaking them,” thereby making chemo more effective.

This is getting some open-minded oncologists very excited! Medicinal mushrooms also strengthen your immune system if you are undergoing chemo, so cancer patients get a double benefit. The list of health benefits science is revealing to us about mushrooms is still growing, but thus far includes the following:

It’s important to eat ONLY organically grown mushrooms. Remember, what makes mushrooms so potent is that they absorb and concentrate whatever they grow in—good OR bad. Mushrooms are known to concentrate heavy metals, and air and water pollutants.

Now that you have the overview, let’s take a look at a few of my favorite health-enhancing mushroom species. We’ll start with a delicious little mushroom you have probably seen on your dinner plate or at your local market—the shiitake.

Reishi is known as Lingzhi in China, or “spirit plant.” It’s also been called “Mushroom of Immortality”—a nickname that kind of says it all. Reishi has been used medicinally in Asia for thousands of years. One of its more useful compounds is ganoderic acid (a triterpenoid), which is being used to treat lung cancer, leukemia and other cancers. The list of Reishi’s health benefits includes the following 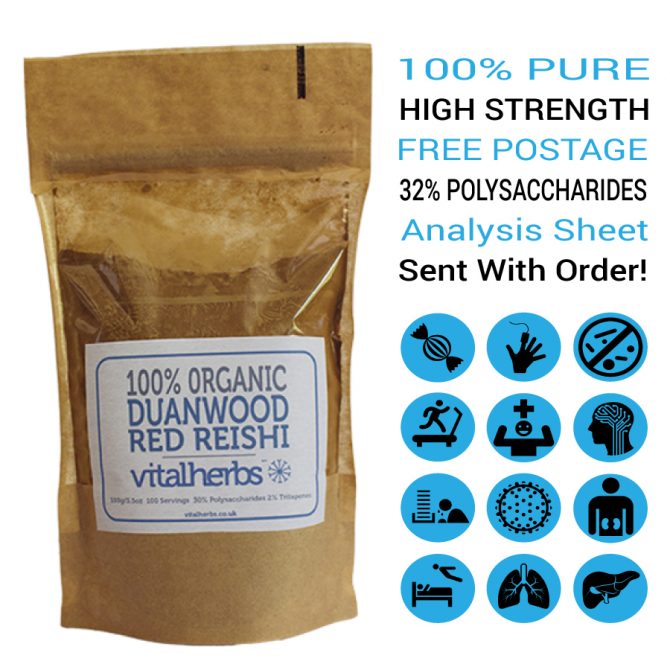 Cordyceps, also called caterpillar fungus or Tochukasu, is a favorite of athletes because it increases ATP production, strength and endurance, and has anti-aging effects. This parasitic mushroom is unique because, in the wild, it grows out of an insect host instead of a plant host. Cordyceps has an enduring history in both traditional Chinese and Tibetan medicine.

Cordyceps has hypoglycemic and possible antidepressant effects, protects your liver and kidneys, increases blood flow, helps normalize your cholesterol levels, and has been used to treat Hepatitis B. It has antitumor properties as well.

Turkey Tail is also known as Coriolis, or “cloud mushroom.”  Science is showing that Turkey Tail mushroom holds an arsenal of cancer-blasting compounds. Two polysaccharide complexes in Turkey Tail are getting a great deal of scientific attention, PSK (or “Kreskin”) and PSP, making it the most extensively researched of all medicinal mushrooms with large scale clinical trials. 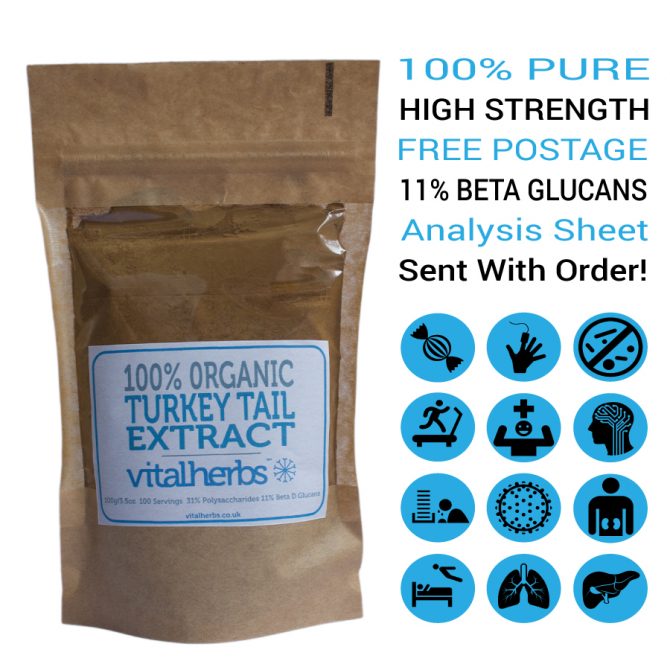 In addition to breast cancer, Turkey Tail has been found to hold promise for other cancers, including stomach, colorectal, lung, esophageal, nasopharyngeal, cervical, and uterine. PSP has been shown to significantly enhance immune status in 70 to 97 percent of cancer patients. Turkey tail is also being used to treat many different infections, including aspergillus niger, Candida albicans, E. coli, HIV, Herpes, and streptococcus pneumonia, and is hepatoprotective. It may also be useful for CFIDS.

A carefully designed blend of medicinal fungi can deliver a powerful therapeutic punch, whether you just wish to help protect yourself from seasonal colds or flu, or you have a more serious condition such as cancer.  Either way, these special mushrooms can be an excellent adjunct to a healthful diet and lifestyle to improve your immune health. If you are interested in more information about medicinal mushrooms, you might consider visiting the following sites: