Red Reishi Extract What Are The Benefits?

Red Reishi Extract Is It That Good For you?

Once upon a time there was a mushroom that was so revered and so highly thought of that it was given many names by different cultures all across the world names such as “mushroom of immortality” or “the resurrection plant” and “the 10,000 year mushroom”.

In Chinese culture it was even put into a fairy tale called The White Snake in which a Reishi mushroom was needed to help save a lovers life and this mushroom had to be stolen from the gods.

Reishi mushrooms have a history dating back over 4000 years when they were considered to be a “superior herb” that improved health, resistance, longevity, energy and memory. Asian rulers would send out envoys to seek out old plum trees and there, growing out of the trunk on three out of every ten thousand trees, was the ganoderma lucidum, the reishi mushroom.

Luckily these days you do not have to be a king or emperor to benefit from this amazing mushroom. Red reishi extract can be bought very easily without needing any titles or vast lands to rule.

And although you can still find them in the wild, you do not need to spend hours walking through forests in the hope of finding one of these special mushrooms to take home with you. And can instead do a quick search online and  find many online stores selling red reishi extract.

That being said not all red reishi extracts you find online and in shops are all that they seem to be in regards to quality and potency and many retailers sell low grade mushroom extracts at very high prices. And further more do not even give the customer any real details about what they are buying. 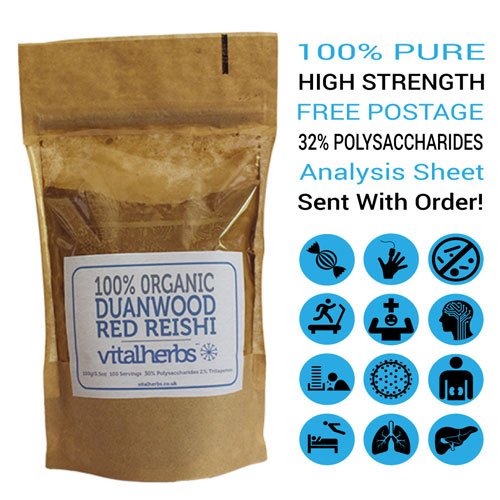 Here at vitalherbs.co.uk we provide a detailed analysis of our red reishi extract and for that matter all our medicinal mushroom extracts.

This analysis includes the polysaccharide and triterpene percentage as well as other vital components such as beta-d glucans. Without which you would have a “inferior herb” instead of the “superior herb” and lose many of the healing properties Reishi is famous for.

According to Drs. Joann Lau and Sanda Zolj, two research scientists at Bellarmine University, reishi mushrooms contain important polysaccharides and saponins that decrease cell proliferation in cancerous lungs. The researchers discovered that this effect was due to apoptosis (“cell death”) instigated by the mushroom’s active compounds.

They concluded that “detailed biochemical characterization of this ancient herbal remedy could hold tremendous promise for the treatment of lung cancer.”

Another Chinese study, which was conducted by researchers at the Department of Pharmacology of Peking University in Beijing and published in the December 2006 issue of the Journal of Asian Natural Products Research, specifically looked into reishi’s effects on diabetic kidney disease.

We’re more closely related to fungi than we are to any other kingdom. We share the same pathogens, meaning bacteria and viruses. As a defense against bacterial invasion, fungi have developed strong antibiotics, which also happen to be effective for us humans. Penicillin, streptomycin, and tetracycline all come from fungal extracts.

The predominant mushrooms displaying antiviral activities are the polypores, sometimes called bracket fungi or woody conks, tough and fibrous fungi characterized by many tiny holes on the underside of their caps.

Polypores such as red Reishi have been dubbed the “frontier” of new medicines and are thought to be the ancestors to most of the gilled mushrooms. Interestingly, there are no known poisonous polypores, whereas there are more than one hundred poisonous gilled mushrooms.

The Proof Is In The Pudding

For many people the claims about the health benefits of Reishi and other medicinal mushrooms can sound far fetched or just plain false as it can sometimes seem hard to believe that nature can give us such amazing resources.

And with large pharmaceutical companies leaving such a big shadow over our culture these days it can also be hard to believe that medicine can even come naturally, especially from such a humble and  lowly thing as a little mushroom!

But as long as new scientific studies keep emerging proving what ancient cultures and herbal traditions have been saying for a very long time about Reishi and it’s medicinal brothers and sisters. We at vitalherbs.co.uk believe we shall be hearing a lot more about these amazing fungi for a very long time to come!