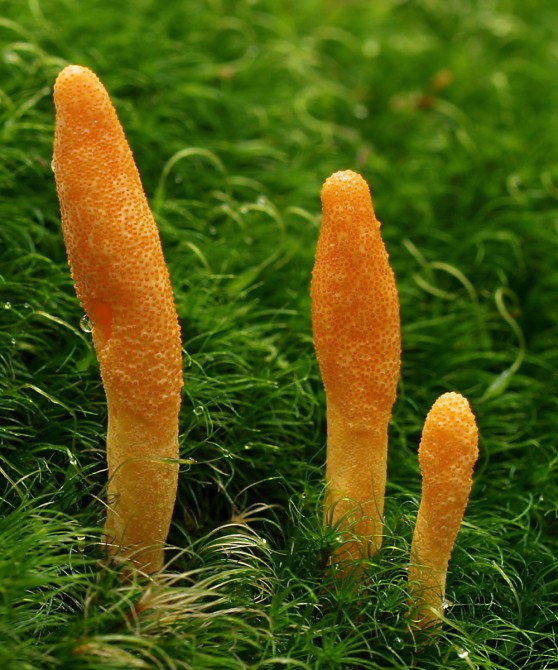 Nature provides an amazing array of resources to improve our health and boost our immunity. Mushrooms are a type of fungus that are enjoyed by people all over the world and renowned for their nutritional benefits. In recent years, scientists have studied the medicinal benefits of the Cordyceps Sinensis mushroom and its effects on ameliorating the negative effects of stress on the body and brain among other things.

Mushrooms have been used as food, medicine, poison, and in spiritual/religious rituals across the world since at least 5000 BC. They have used in tonics, soups, teas, prepared foods, and herbal formulas to promote health and longevity. The mushroom fungus Penicillium was the raw material used to create the antibiotic, penicillin, which transformed the medical world.

This oddly shaped mushroom grows native to China and is all around the Tibetan area. For years, it was thought to be a living worm rather than a mushroom and was nicknamed the caterpillar fungus as it is seen growing on the sides of trees. Cordyceps is actually a fungal spore that kills insects such as caterpillars and moths and feeds off their tissues.

The Cordyceps mushroom has been described in old Chinese medical books from ancient times and is also found in Tibetan medicine. Traditional Tibetan healers have recommended Cordyceps as a tonic for all illnesses. This is because they continually witness how it improves people’s energy, sleep habits, digestion, stamina, libido and endurance.

Cordyceps first became popular in the Western world when the coach of the record breaking Chinese female runners credited it with the team’s extraordinary success. Today, many researchers believe Cordyceps to be one of the most powerful performance and longevity promoting herbs (1).

Chronic stress impairs memory, cognitive acceleration, the speed of cognitive processing, and judgement or reasoning skills. Additionally, chronic stress induces mood disorders and depression. It also accelerates the process of neurodegeneration that can ultimately lead to diseases such as Parkinson’s, dementia, and Alzheimer’s.

Studying stress, Cordyceps, and the brain

When scientists are studying the delirious effects of chronic stress on brain health, they look at inflammatory markers such as tumor necrosis factor alpha (TNF-a), interleukin-6 and NF-kb. They also look at the key neurotransmitters such as serotonin, norepinephrine, dopamine, acetylcholine and gamma amino butyric acid among others.

A 2014 study published in Evidence Based Complimentary and Alternative Medicine showed that Cordyceps supplementation reduced inflammatory markers in the hippocampus of the brain. It also raised up brain-derived neurotrophic growth factor and 5-HTP (precursor to serotonin and norepinephrine levels). These results demonstrated that Cordyceps has positive benefits on mood and memory levels (2).

Another 2012 study showed that Cordyceps lowered inflammatory markers in the brain of D-galactose injected mice and increased key anti-oxidants such as superoxide dismutase and glutathione. The non-treated mice showed signs of early mental decline while the Cordyceps treated mice showed great ability to think and function at a high level (3). The researchers suggested based on study results that Cordyceps improves memory and ameliorates the decline of mental function.

About the author:
Dr David Jockers is a Maximized Living doctor and owns and operates Exodus Health Center in Kennesaw, Georgia where he specializes in functional nutrition, functional medicine and corrective chiropractic care to get to the underlying cause of major health problems.