Are You Sleeping Enough? Why Sleeping Is So Important

Whether you’re a lark or an owl, sleep is not a luxury, nor is it something to be caught up at weekends, or saved for holidays. Mention the words ‘healthy lifestyle’ and the two things that generally jump to mind are nutrition and exercise. All well and good, but without sufficient daily sleep hours in your ‘account’, the body is unable to regenerate, but more importantly, the brain just winds down, hindering your ability to think clearly and keep your emotions flowing and in balance. We are meant to spend around one-third of our lives asleep and yet it’s one of the first activities to be sacrificed when the pressure is on. Why, when a healthy sleep account is one of the surefire ways of maintaining youthful, resilient, vitality of both body and mind? 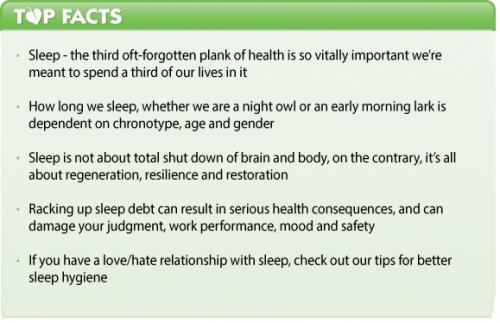 Last week we featured the other two vital planks of health and wellbeing, nutrition and activity. Being right in the middle of the European holiday season, this week, we’re focusing on the third, oft forgotten, vital element to good health – sleep. So, put your feet up, take a timeout and find out whether you’re a lark or an owl and why your night’s sleep is so vitally important.
Your natural chronotype

As adults it doesn’t take long to work out whether we have a preference for late nights or early mornings. Where you fall on this spectrum determines whether you are an early rising lark or a night owl and what your chronotype is. The length of time you sleep depends on your chronotype, which in turn is both age and gender dependent, with women generally requiring more sleep than men.

The Munich Chronotype Questionnaire has now been validated by more than 55,000 respondents and is well documented in the peer review. Whilst you may have a good idea of where you fit, you can now take the questionnaire and find out for sure.
Sleep science

All species across the animal kingdom (humans included!) have a 24-hour rhythm that’s determined by genes. A tiny little area in our brain called the suprachiasmatic nucleus (SCN) controls our human rhythm and receives information through the eyes, specifically when light hits the retina. This information is how our bodies monitor sleep and wake cycles.

In a nutshell, the SCN directs when we sleep and wake. It has control over the major organs in our body so light hitting the eye tells the SCN to activate the organs that should be ‘awake’ and active during the day, and the ones that need to be active during the night. Sleep is not a case of the brain shutting down, but a time in which it busies itself consolidating memories, and physically and mentally repairing the body. The SCN relies on sending signals via different pathways in the body, such as the release of the hormone, melatonin, to regulate the sleep-wake cycle, or through the activation of a particular area of the body. This should all run like clockwork, but our modern environment does tend to play havoc with this system.
How much sleep is enough? 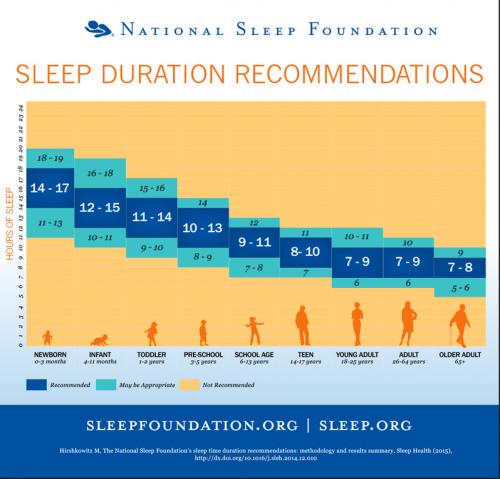 If you’re a 6-hour-a-nighter – or less – think again! Adults, regardless of gender, typically need between 7 – 9 hours of sleep a night for optimal function of body and brain. Scrimping on 1 or 2 hours a night through the week racks up your sleep debt, making it impossible to repay at the weekends. If you’re under-sleeping by just an hour every weeknight, you’ll end up with a monumental 5 hours of sleep debt by the time the weekend arrives. Just like a bank overdraft, the price for sleep debt has to be paid and all too often it’s the price of your health or worse, yours and others safety because your reactions are so much slower.

The US army has spent 12-years and $18 million developing a biomathematical fatigue model based on sleep, activity, fatigue, task and effectiveness (SAFTE). This model has now been extensively validated and is used on a daily basis. It may come as a surprise to find out that being fatigued enough to be running on 70% effectiveness is roughly equivalent to having a 0.08 (80 mg alcohol/100 ml blood) blood alcohol level or 35 mcg per 100 ml in a breath test. Essentially meaning that if you’re driving tired, you’ll be 40% slower to respond if you have reached that 70% effectiveness level. Worse, as tired as you are, you might as well be drunk!

While we sleep our bodies carry out multiple functions. Being sleep deprived can damage your judgment, work performance, mood and safety. But there also appears to be a price to pay for being a night owl, beyond the social jetlag caused from being out of sync with everyone else.

Research shows that different chronotypes are associated with genetic variations, differences in lifestyle, mood and cognitive function, as well as differing risks for health problems, sleep disorders and depression. Under examination, there is evidence of differences in the brains of early risers (larks), night owls and those that fall into the gap in between. Night owls show a reduced integrity of the white matter in areas of the brain, which is the fatty tissue responsible for communication between nerve cells. Diminished integrity of the white matter has been linked to depression and disruption in normal cognitive function.

If you’re a night owl don’t despair. There is also research that shows ‘owls’ are superior lateral thinkers, who bested ‘morning larks’ in qualities linked to general intelligence!
The price of sleep deprivation

Racking up your sleep debt over years, rather than weeks or months, can result in more serious clinical consequences. Already mentioned is that sleep enables brain-waste removal and the transfer of memories to long-term storage, but it also plays an important role in metabolic health. Short-term disrupted sleep can result in decreased glucose tolerance, increased sympathetic tone and blood pressure, and has been linked to impaired immune responses, learning deficits, and mood disorders. If sleep deprivation continues, it is associated with a higher body mass index and increased risk for diabetes mellitus and hypertension – all predictors of cardiovascular disease.

The following is not an exhaustive list of health issues linked to sleep deprivation, but illustrates how integral sleep is to our overall wellbeing:

There are various steps you can take if you want to improve your sleep. Lack of routine, stimulants and artificial light can all affect the quality of your sleep. Try some of the ideas below:

Avoid stimulants: Stay away from alcohol within three hours of going to bed, caffeine after 12 noon, nicotine, medicines such as decongestants and stimulating medications, try to exercise earlier in the day, not right before bedtime, and avoid working, the news, watching a thriller on TV, having a row (!) or anything that gets the mind racing close to bedtime.
Be mindful of your environment: Avoid bright bedroom or bathroom lights just before you get into bed, use a low-light lamp or a dimmer switch, use earplugs if you have outside noise or a snorer next to you in bed, remove any clocks or anything in the bedroom that makes a noise, and consider using blackout blinds to minimise all outside light or an eye mask.
Plan your sleep: Sleep for set times each day, try to get to bed before midnight, aim for the same number of hours in bed each day, avoid afternoon naps, and avoid eating late at night. Your body should be preparing for its night-time based activities like growing, repairing and consolidating, rather than digesting your food and making the liver work overtime!
Relaxation techniques: Read, rather than TV, before going to bed, practice some calming yoga poses, keep a pad of paper next to the bed if recurrent thoughts are a problem so that you can write them down and then go back to sleep
Air quality: Keep the air clean through use of an air purifier, or a cracked window, and keep your bedroom at a comfortable temperature.
Electrical Fields: Try to keep your head at least 5 feet away from electrical sources, such as electrical outlets, clock radios, stereos, computers, baby monitors, mobile phones. If you can’t move these electrical sources, then consider moving your bed.